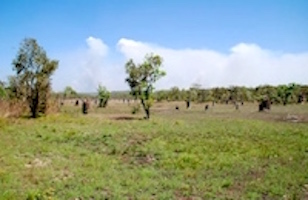 South Africa has been on Coronavirus Lockdown for nearly four months, during this process I have accepted my Aboriginal heritage, my new spirit follows the Aboriginal from West Africa across the Atlantic, eventually reaching our destination, the Aboriginal of Australia.

Some Australians are the first Settlers, who are showing signs of an expression of having a conscience. My spirit guide instructs me to look for the ‘killing fields’, all I can find is the conversations taking place around the ‘Killing Times’, as researchers collate memories and history from both Settlers and Aborigines, typically of the white settler, some honesty is expressed, but the truth remains hidden.

Then, I find the following comment, which directs me to the acknowledgement that the Aborigine had created grasslands, by burning the forestland over the centuries, this leads to the principle of Cool Burn, and the evidence that the Aboriginal, were farmers, in the real sense .

This restriction proved ineffective too as graziers openly flaunted these restrictions and ran their sheep and cattle deeper and deeper into the interior, ironically in some situations onto grasslands the Aboriginals had created over the centuries by burning forestland.

Research papers, typically would go though great detail, as the Settlers attempt to hide the truth, the massacres of the Aborigines are admitted to, the numbers never, the reasons always blame the Aborigine. Many Settler Families take years before they release a little bit of what they know about how their families were involved in the massacres, no-one talks about how their families secured their wealth.

In this latest move towards releasing the guilt conscience, almost no Aborigine voice is heard, if interaction takes place, they will extend their love and thanks, they will never express any antipathy towards the perpetrators of the evil, they fear repercussions, maybe death.

In South Africa, no antipathy is expressed by the Aboriginal, fears of repercussions is the continued exclusion from the formal economy, if antipathy does not exist, no reparation is possible, is what I have written about for years, today, I understand the Aboriginal reluctance, I question whether I am doing the right thing, by trying to generate antipathy.

I was cultivated to see the African, mainly as uncivilised, inferior, use descriptions in the diminutive, the boy, the girl, never as an adult, never as a human. While the language is biased, while hidden in the cultivated mind, is the intention of the language used, the concept that the Black, the Aborigines are inferior, antipathy is impossible.

Hidden in all legislation, in all western academic writings, the text, is the ‘white’ bias thinking, that no matter how much ‘talking’ is being done between black and white,the use of the, English language, the bias that the nouns, the adjectives, the adverbs, tell different stories to different people, then I discovered, that the Aborigines used Cool Burn to manage their land, and suddenly, not only do I see the atrocities by the Settler through different eyes, this allows be to see superiority in the Aboriginal, superiority that I was only able to see, in the West African, the Mali, Mansa Musa, Timbuktu, legends.

The Aborigine, would employ Cool Burn, when wind and weather conditions were favourable, a cool burn that allowed animals, including beetles and ant colonies time to escape. Young trees survived, the burnt grass kept its shape, and the grass seeds remained intact for regrowth.

The Aboriginal people consider the trees’ canopy “sacred”, so a Cool Burn preserves the canopy of trees to achieve the following;

Protection and provision. The canopy provides shade, fruit flowers and seeds. It allows animals to come back quickly.

Refuge from the fire. When there’s a Cool Burn, insects and other small animals crawl up the tree to safety.

Preservation of the tree cycle. With a Cool Burn, the canopy remains intact the, tree does not miss its cyclic renewal, and preserves the tree cycle

Trigger for germination. The smoke from a cool burn goes through the canopy and triggers off a reaction for seeds up there to germinate.

During a Cool Burn, bush turkeys hunt for bugs and insects at the fire line while hawks scour it for small animals.

Animals know how to protect themselves from the Cool Burn: ants and snakes go deep down into their nests and burrows, kangaroos find safe spots on rocky outcrops.

New grass grows only weeks after a Cool Burn, it holds the soil together and provides a source of food for wombats, wallabies and native birds.

Wallaby, birds and other animals bathe in the cool ash to cleanse themselves of lice.

For this reason, family grave sites are sacred, and visited during cultural celebrations, community leaders grave sites, would be sacred to the entire community.

These cultural grave sites that the Aboriginal celebrates as sacred, whether in South Africa, Australia, or the Americas, the Settler found great difficulty in understanding, the Aboriginal’s anger, at our lack of respect for their sacred grounds, yet the entire Christian world, reacts to Turkey, moving Hagia Sophia from a status of Museum, visited by millions every year, to a Mosque status, which will still allow the millions to pay their respects.

Two months back, I had a reparation plan for the Australian Aborigine, a financial package that the world has never been presented with, the package would have moved the entire Aboriginal into the top 20% wealth bracket.

While the systemic bias, that allowed the evil to remove the opportunities from people defined as non-white in 1681, while we allow the systemic bias mindsets, that allowed the economic segregation to continue through to today, no amount of money will restore the dignity and opportunity, that will bring reparation, if the present created social stratification, is not reversed.

Add your log to the fire, if it is placed in the right position, it will be a Cool Burn, you will be able to share the heat of your log, do not be afraid that your log will burn hot, it took our Aboriginal ancestors centuries to achieve the necessary skills.