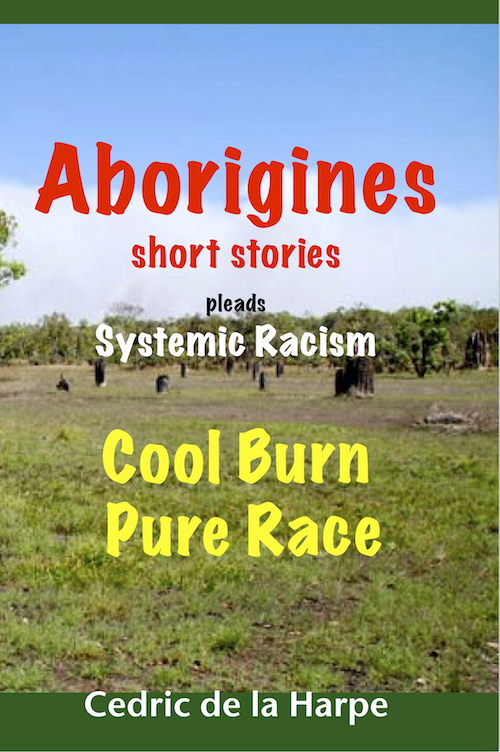 ABORIGINE QUALIFICATION Aborigines Short Story One introduces you to the authors heritage, how many of us whites may ‘qualify’?

Over the years I have promoted that the African lives a lifestyle embodied in humanity, controlled by the belief that God is supreme, and God is in everyone, religion defines what is right/wrong, as an example, the ten commandments cultivates our conscience, our moral sense of right and wrong, our conscious.

Once I understood this humanity lifestyle of the African, I briefly considered myself as an African, when this happens, I find the concept of who an African is difficult to understand, therefore I lose direction.

Many, many years ago, portions of our African Aboriginal populations migrated from their lands in Africa, moving through Asia, and eventually settling in Australia, some 40,000 years ago. The European only invade Australia in 1787, some 300 years into the Colonisation of the New World, where the Natives they find are labelled ‘Indians’, and in Africa, one of the labels allocated to our indigenous population is Native, in Australia the Native inhabitants, are immeaditely labelled as the ‘Aborigines’.

This new understanding excites me, when a Coloniser invades another country, and they find a community, that are obviously the permanent occupants, the ‘original inhabitants’, and the invader identifies them Aborigines, all Colonised countries will find this label inspiring, as Aboriginals representing the same team, we unite, we represent far more than the ‘white’ Settler/Coloniser could ever feel, no longer will be talk from the inferiority cage that we were condemned to in 1681, no longer will we need to beg the ‘white’ Settler/Coloniser, to consider that our lives matter, before they kill us.

This manuscript, takes me into the realms of the Aboriginal people, the original people, and I am able to identify as an aborigine, and the relationships during the early days of Colonisation, allows me to claim Aborigine status through my great-grandmother, and encourage others, to give serious consideration to where they belong.

Some four years back, I Google Frank John Henry de la Harpe, my father’s name, he died long before Google was born, so to my surprise, I find a link on the internet, his and my mom’s marriage registry details, located in the 1820 English Settler’s website, de la Harpe has French origins, so I never expected my heritage to be part of the English Settlers’, particularly after I have become of the opinion that the English Coloniser, stole everything from the blacks.

I study the heritage of the de la Harpe families, they are all farmers in the Eastern Cape, except for grandfather John, when he marries grandmother Rose, he is a wagon driver.

Grandfather John was born in 1885, and hidden in our heritage, is the sexual relationships that took place between young settler white boys, and young female servant / slaves, whether rape or voluntary, often resulting in the birth of children. It was not uncommon for the couples to have great affection for one another, or, the young lady just complied in order to keep, not only her employment, or the home, the shack on the property, where she was living.

If the child, born out of this relationship, was too dark, the child was added to the servant / slave contingent, if he was of fair enough skin, he was allowed to participate in the white families life, not entirely a son, or daughter, more a preferred slave, who was taught to ride, to shoot, and given the preferred jobs to do on the farm, and thus the position of wagon driver.

This settler, white boy to old white man, relationships with the Aboriginal/slave woman, took place in South Africa, the New World Americas. Australia, and many other Colonies in the world, many of the off-spring, if too dark, were condemned to poverty black communities, those of us, who skins were light enough to pass as white, automatically qualified for the level three social peer group.

Grandfather John’s heritage, was almost kept a secret from us children, my mother always claiming to know our family origins, but never producing the information.

I have known this information for four years, yet found it difficult, to openly claim African origins, then as this manuscript covers the Aboriginals in the America’s, and particularly Australia, where the Aborigines massacre is slowly been uncovered, I start to link the original inhabitants of Australia, to the original inhabitants of South Africa, and this opens the door for me to be selected to proudly play, for the ‘Aboriginal Team’.

Our Ancestors call on the world, to follow the Aborigines Short Stories, we will find many clues, clues that slowly remove the amnesia, cultivated by the Coloniser, bringing answers to questions, we have never been brave enough to ask.